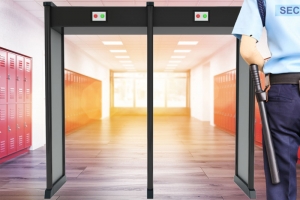 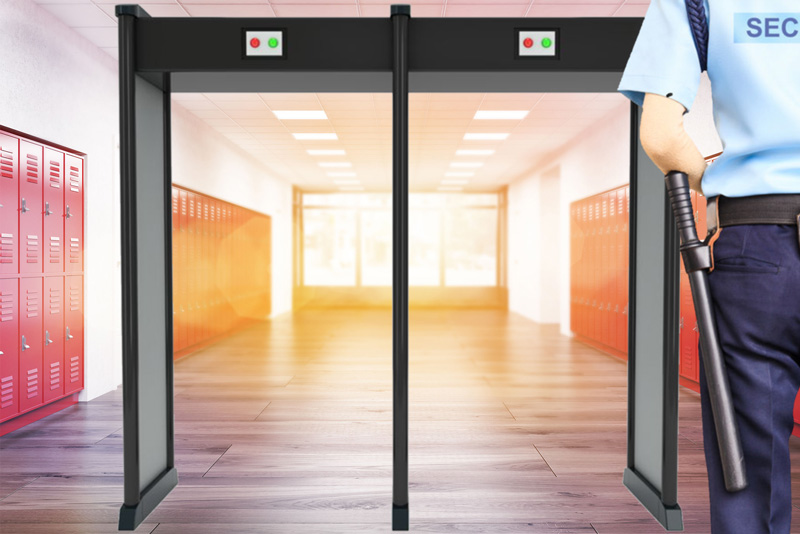 We know that our children are being raised with extraordinary levels of anxiety these days. You might argue that your anxiety as a child or teen was just as horrific. But hell, you made it: you grew up and now you are raising your own family. So what’s the big deal?

I beg of you – just as we hated when our parents compared their growing up to our childhood – can we just stop comparing our childhood anxieties to those of our children today? When has a comparison of fear, anxiety, trauma, or bullying, ever led to a legitimate scale of whose feelings/reactions are more real? More worthy of attention? More painful?

I, for one, never feared a person entering my school with a weapon of any kind, with an intention to kill as many as possible – for revenge, for notoriety, or just for the sheer hell of it. I didn’t think twice of who walked down my hallway.

A stranger my own age or a strange adult in my school was merely reason to gossip: who was the newbie? There was no fear; there was intrigue.

But that was then.

And this is now.

Still, even as my own children began to face school with increased security, hall passes, guest check-ins, and security cameras, I remained oblivious. Teaching was happening. Homework. Tests. All the extracurricular stuff that my gas tank needed constant refills for. My kids seemed unaffected by what was slowly infiltrating their school days.

I'm not even sure when we reached that moment when doors were locked and every guest was buzzed in from the only entrance enter-able. It was strange when I needed to present my official ID to receive an official school ID just to cross from the security desk (when did they put that in?) to the guidance counselor’s office not five steps away to discuss colleges and the “after” life.

Early on, reports of rare, horrible events were far, far away from my daughters' still-young ears; my ability to control what they saw and what they heard was remarkable by today's standards. By the time they reached their tweens, social media had the eyes and ears of their friends and peers. And there was an uptick in life-and-death moments in schools. Kids were talking. I needed to listen.

I am still listening.

It’s so much easier to see that their school day has a level of anxiety that mine never had. Not with a fire drill, tornado drill, or even a nuclear threat.

Today, practice lockdowns have become so common place that some schools don’t inform parents before, during, or after the fact. Some schools are having them at least once a week but on different days and at different times. Lockdowns are the new numb routine. And they are not fun.

But it's all in the name of safety: Kids need to “know what to do” no matter where they are trapped – library, gymnasium, classroom, cafeteria. They will learn that they can use anything as a weapon. Really?? Someone please ask our student, staff, and faculty survivors: Why didn’t they toss their milk carton harder? Why didn’t they try to fight back with their calculator? Why didn't they spear the person with the ruler or compass from Geometry class? Why didn’t someone pick up the fire extinguisher and run full speed at the assailant with the rifle that was spraying bullets in every direction?

So many opportunities missed? Well, let’s keep practicing. Surely, we can train our kids and our staff how to react. Don't huddle. Scatter. Don't be still. Run like hell. Don't be silent. Scream loudly to confuse the attacker. Don't sit in the dark. Keep the lights on. Or is it the opposite of all those?

The one piece of advice that experts do agree on: Turn OFF the tech. The pings, ring, dings, and vibrations become targets. Social media meant for parents and first responders becomes a goldmine of location information for the assailant. Kids become focused on tech instead of on what is happening so that instructions for what to do and where to go are unheeded. If chaos and panic could possibly get worse, tech ensures that.

No matter your stance on arming our teachers/staff/admin (and hoping that they don’t ever “go postal” themselves), the real opportunities missed are slipping away.

Our schools are harbors for all who are suffering the effects of PTSD. It's true: they may not have been shot at; they may not have directly witnessed or heard the spray of bullets or have been forced to run from anyone weidling a weapon; but they are nonetheless experiencing trauma reactions to what they have seen in their own social media world. They are now reacting to the very threat that schools are attempting to alleviate.

Too many of our schools are not providing equal and necessary attempts to engage our students, faculty, and staff in conversations. What if, for instance, schools offered just as much counseling as security?  Do you know how much money your school or district is spending on security? How much on counseling? Who will tell you? AND, do you agree with those priorities?

What if all kids had access to mental health services during the school day, where the school psychologists would be included in ALL health insurance plans with a $0 copay and $0 deductible?

What if no one needed to juggle after-school and after-work schedules to get to a counselor?

What if counseling was normalized?

Instead, students (and staff, too) are fearful and hypervigilant both in crowded hallways and deserted ones. A slammed locker is the cause of a full-blown anxiety attack. Students stampeding down a hallway is cause for alarm until you realize that they are on the track team and late for practice.

Yet many of our kids (and staff, as well) don’t even know what is happening to them: why do they feel so jumpy or irritable; why can they sense their heart racing; why does their chest suddenly hurt and breathing feels strange and difficult; why does their stomach lurch – repeatedly, but without reason . . . How can we expect anyone to describe symptoms of fear and panic that have no easily identifiable trigger? And to whom do we expect our kids (or staff!) to describe these odd sensations?

The director of a well-known private college counseling center told me recently that “kids should know (that) our center is open to anyone with problems”. Of course. Except that, like many other mental health conditions, PTSD comes with a sudden onset of symptoms – and these very symptoms can often occur long after an “obvious” event. And most of the time, those afflicted with symptoms cannot begin to express what they are feeling. Without notices around our university campuses and in our high school and middle school hallways that give kids clues as to what to look for in themselves or a friend, there is no conversation to be had. There is only more fear and confusion. More silence. More shame. More: "What's wrong with me??"

And let's be clear: PTSD does not differentiate by age, economic status, academic success or stress, race, gender, . . .  PTSD grabs anyone and everyone without bias and holds on tight.

Consider what school might be like if discussions regarding our mental health were not surrounded by stigma but treated with the same curiosity and respect as conversations regarding physical conditions? What if we talked at least as much about mental health as we do drugs, smoking, alcohol, or nutrition? In some schools, STD’s and birth control get more airtime if a student is not exempt and doesn't miss the one day of the only year when it is covered in class versus hallway conversations loaded with misinformation by questionable teen experts.

We cannot trust the unreliable chaos of social media to educate and help our kids feel safe in school.

The (unintended?) silence of our schools may be seen as administrators trying to hold controversy at bay while they are seen as being vigilant with security and instruction. They are doing the best they can. Undoubtedly. But not enough. Clearly.

I argue that the voices of our students must also be heard. These voices demand our attention and our respect. Not just after the fact, but long before a crisis happens."  How else can we best protect the very people we are meant to teach? Sadly, there's more to our curriculum today that must be included.

One thing is very apparent: We need more voices than lockdowns.

It is time for schools to take charge. To create conversations. And to open up the doors to the offices of trained counselors and school psychologists. Academic success is short-lived when mental health conditions go unchecked. Lockdowns alone are not the answer. Arming people physically and not mentally is never the answer. 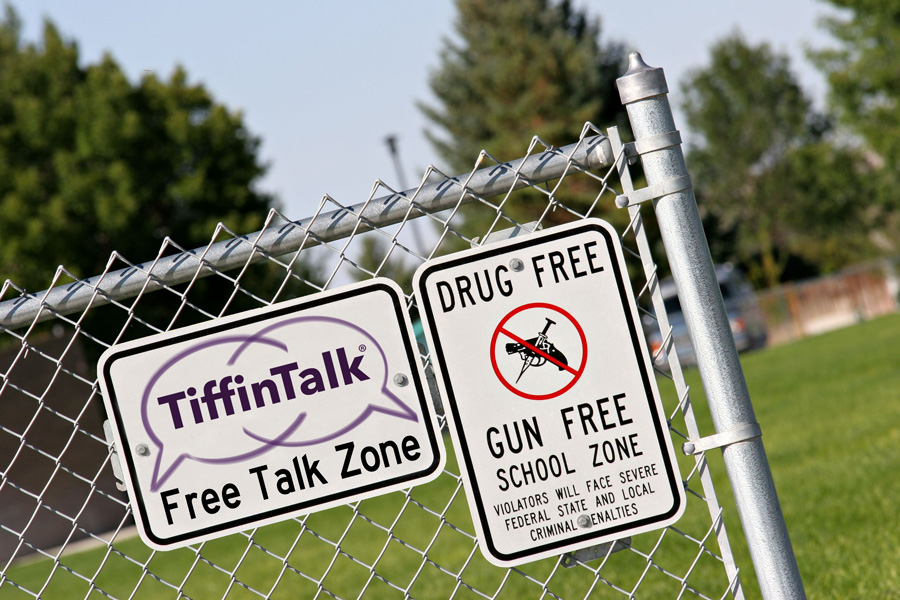 It begins by talking with (not “to”) our school communities, with encouraging dialogues that involve parents, staff, faculty, and students (of most ages).

It begins with recognizing what everyone is experiencing within so that we can create a safer environment for all.

In a world that seems to fear voices, we need to strive harder to come together to raise our children to live fearlessly with endless conversations at home, at school, in our communities, and globally.

Talk is not just free; it's freedom.

Kat Rowan, CEO and Creative Director of TiffinTalk, recommends talk. TiffinTalk’s different cards lines inspire face-to-face communications. TiffinTalk’s FindingYourVoice line for mental health professionals and students can help break through silences and shame. Themed sets include Self-Confidence; Anxiety, Fears, & Phobias; PTSD; Trauma; Self-Identity; and many others. Students are not immune to the struggles that silenced most of us at their age. TiffinTalk believes we can do better by today's kids. They also offer a Child & Teen line designed to engage parents as well as educators and specialists in meaningful, creative, and thought-provoking conversations. Talk should not be typed. Voices need to be heard.

TiffinTalk: Tech Off. Talk On.