The Licker and the Bonker 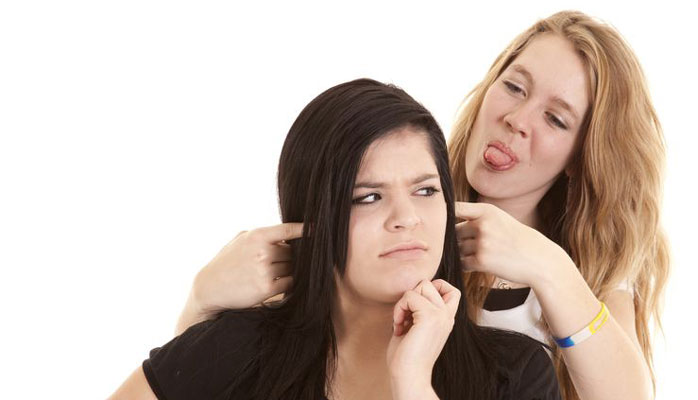 ...in a family that you may know (or maybe is your own?), there lived two sisters. Their jobs, as defined by the intricate sequences embedded in sibling DNA, were to love, protect and annoy the hell out of each other.

And so they did.

Separated by only 2 1/2; years, the sisters had unique and distinct personalities. This surprised nobody except their parents.

First-born soon became the dominant child. She commandeered the sibling ship, set all the rules of the open seas, and often ordered second-born to walk the plank. This usually took the form of: “Do as I say. I’m in charge.”

And she was. Despite the orders of her parental units and often behind their backs, First-born decided who did what chores, what movies would be watched (or not watched), and she was (or tried to be) the chooser of bedtime songs and stories.

Second-born, who was a leader in her own right (amongst her peers), automatically followed the adored sister’s commands. As she got older, it must be noted, Second-born was not always completely happy with the arrangement. Still, she often gave in and gave up just to get on with life. Little by little, she learned to speak up for her rights, but generally, she stormed off to do as she was told by the commander.

This was the backdrop of their stories:

Older sister used words and assorted taunts and silence to get her way. Younger sister used shouts and screams and – and, their mom would admit here, sometimes, within very good reason – hands. And though their mom always held to the “Hands are for hugging” rule, there were still moments when it seemed only fair for the younger sister to literally strike out in frustration. HOWEVER, it should be noted that in those situations, both sisters were given consequences.

And so it went on for many years. Sisterly love. Snuggles. Togetherness.

And then the bugging would begin.

And older sister would strike with her words, while younger sister used her hands. Each rebuttal – verbal or physical – was ow-ey in its own way.

In time and with guidance, they learned to change their tactics.

And here’s the updated role of the mom as referee:

Older sister: “She’s bugging me and then she bonked me on the head with her [paperback] book.”

Younger sister: “She’s teasing me and then she licked me.”

Mother: “How old are you again? Please tell me not to laugh out loud at the both of you.”

<<Mother is laughing out loud anyway.>>

“Because do you really want to hear me say, ‘Don’t bonk your older sister even if she deserves it. And, no, you can’t lick your younger sister even if by ‘licking’ you are licking your finger first and then touching her.’? And do you really want me to tell you this as we stand HERE?? – in the middle of the college bookstore?? Are you kidding me??”

But, apparently, the mother does say it. And, frankly, the mother is saying it a lot these days. The sisters are laughing at each other, even as they are annoyed.

They are chasing each other around. In public. In the house. Wherever they are determined to bug each other. (And, their mom.)

And then they inevitably come running to the mom – in person or by phone.

The mom then speaks her words of wisdom. (It’s in the parenting script, page 37, paragraph 2. Let me know if you need a copy.)

The sisters squabble some more but who knows if they really mean it and who knows if one of them will get angry for real? They are both laughing. Not much has changed.

And yet, they’ve come a long way.

And the mom smiles.

It’s obvious – even to the sisters – how much they truly love each other. 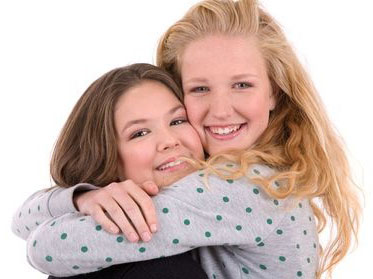