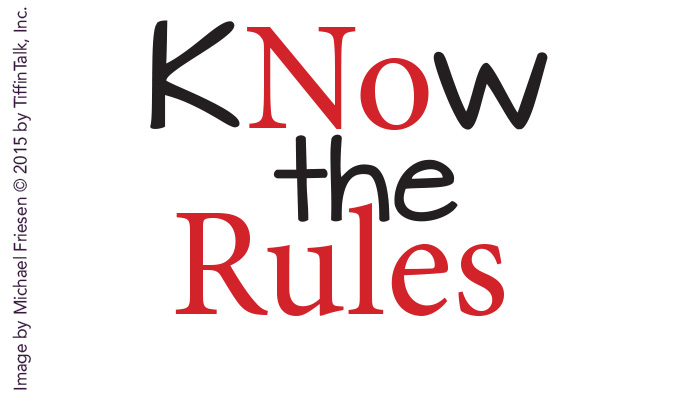 Before I became a parent, I dreamed that I would one day launch Parents without Rules (PwR), the sister group of Doctors without Borders. Sort of.

I was experiencing a classic case of I-will-not-parent-as-I-was-parented.

And then I actually became a parent.

I thought that role-modeling – with a healthy dollop of discussion and guidance – would help my children navigate through life. I thought I wouldn’t need any hard-and-fast rules with consequences attached to them.

My children, as it turns out, have grown up with lots of rules. Written and unwritten. Threatened and real. Consequences out the proverbial wazoo and merely implied.

Though I am not positive, it may have started with the first intentional, frustrated swat of a tiny palm as my angel swung at another child. And without thinking, rule 1 hit the book (and I lost my membership – albeit imaginary – in the PwR):

Hands are for hugging – not hitting.

Other rules quickly followed that ranged in creativity and would easily rank high on the BPR (Bizarre Parenting Rule) scale. Like:

Teeth are for biting food, not people.
(Excuse me for asking, but what parent ever expects the need
to add the utterly obvious to the rulebook?)

No pencils up your nose.
(No comment. Except that I have heard variations that involve
coins, carrots, and certain toys that would seem impossible possibilities.)

By the way, the better rule is:

Nothing up your nose. Period.
(Amendments to rules turn out to be a good idea.)

Use a tissue, not your sleeve or hand and then the car seat –
or anywhere else for that matter.
(Again, no comment. Really.
As in: You REALLY do NOT want a comment here.
Except this: Layers.
And this: We had to ditch the car seat.)

And these personal favorites:

No ice skating in the house.

No swimming during a concert.

No pirouettes or slam dancing in a restaurant.
(Because, sometimes to a child, pre-teen or teen, the less sense it makes,
the more sense it makes. In other words, they get the point better by
your not making the point outright … Sometimes.)

Every parent develops their own set of regulations that they never expected to state out loud to their precious, perfect offspring. And certainly not aloud to their child in front of other adults. Perish the thought! (Do we really need a rule on intentional farting? And does EVERYONE need to hear it?)

Somehow, while I was proud (and perhaps stupidly righteous) that I never needed to repeat the “No fingers in the outlet” directive, I did need to annoyingly restate rules involving chores, personal privacy, and common courtesies.

I became the Rule Nag.

Until I learned that nagging wasn’t reaching the inner ear of my child.

In fact, I am fairly certain that there is a scientific study that proves that nagging causes premature and temporary deafness.

Thus: consequences. Carefully considered. And almost always chosen by the child with final approval required of the parent. Child-chosen consequences turned out to be a helluva lot more meaningful and it cured the “nags” and the “deafness”.

Use your manners at all times with all people – including family.

No playing with or using a gift until you write – and send –
the HANDWRITTEN thank you note.

No rides with teenage drivers if more than 1 passenger is in the car.

Don’t get me wrong, though. I still claim adult status and years of wisdom over the still-developing brain of the child/pre-teen/teen. But, we work the rules together. And we talk a helluva lot more than we text. Daily.

Some rules have hit the books with alarming speed, no majority vote, and no discussion.

Bam! New rule to fit the immediate situation at hand. Invented on the spot with a to-hell-with-the-basic-rule attitude which normally requires parents to clearly establish all rules in advance.

And, just saying: It took me several precious parenting years to realize that the guidebook that I birthed with each daughter did not clearly explain that each child requires her own rules and their own set of consequences. Who knew?

Unlike those rulebooks for sports, my parenting rulebook started very thin and suddenly required supplemental pages before it began to thin out again.

I am fairly certain that eventually I will be left with one universal rule:

Call your mother. She worries. And she loves you.