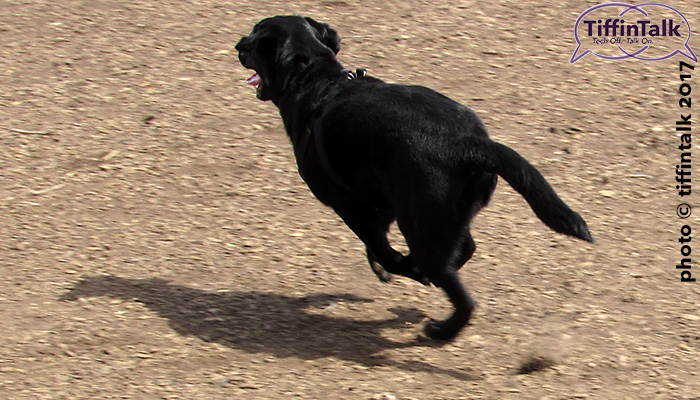 If you haven’t read it already (and you haven’t just eaten), you might skim the last blog about the vermin-vomiting dog. It’ll get you in the right dog mind. Or left one. (Is there actually room for two?)

Unexpectedly, I’m riffing on the service dog. Turns out that animals (and kids) actually do provide a fodder for stories that I never thought I’d tell. Those poop stories I listened to when I was not a parent – the very stories I swore I would never, NEVER, be reduced to even whispering aloud when I became a parent – were the only stories I had in my sleep-deprived-parenting-save-me-from-myself-and-my-pooping-infant brain almost immediately after I gave birth. And yes, I told those very stories with great angst and relief.

And now it’s my turn. Again.

Think much larger and now much smarter dog. (Then ratchet back those thoughts a notch. It’s only been four weeks – she’s a lab dog, not a lab experiment!)

I am, tonight, the Great Mom. I send my kid out for a night by herself to a place that isn’t ready to deal with service dogs-still-in-training. My teen deserves a break. I can watch a service dog for a few hours. Really, I can.

Well, maybe you can. But the dog awful truth is ...

I’m bored. The dog is bored. The dog is mournfully missing her bonded-to-person. The dog is vying for Moodiest Dog in the Whole Dog World award. I’d give her the damn award AND a treat the size of an Emmy but I’m too damn moody to be a fair judge of winner vs runner up. (Besides, I might switch envelopes at the last moment and then I’d have to deal with a whole new fiasco.)

How can I suck at this so thoroughly?

I am a parent, after all. And parents play with their kids.

Except the reality is that I didn’t. I couldn’t. I was not a good parent-player-with-kids. (You can ask my girls whether that’s just my memory. If they say otherwise, they are polite liars.)

Or just ask the dog. She knows my secret!

I read to my girls. A lot. We were library fanatics as soon as they so much as toddled and waddled. We’d book it to the library in our “purple chariot” (read: purple jog stroller for two with plenty of room for books underneath. And snacks. And diapers. And water. And bandaids …)

And we talked. A lot.

We told stories. A lot.

And now I’m trying all this out on the dog. She appears mildly interested but is clearly not into my babbling and isn’t anticipating page turns with even the slightest show of polite curiosity. She’s bored.

But, I remember! I also played board games with my girls! Educational ones which were engaging for us both. (And no, for the record it did NOT matter who won. I’m not entirely evil.)

The dog, as it turns out, actually loves board games. Loves eating them, that is. She eats the boards, and then moves on the to the game pieces, and paws at the spinner like that’s the entire game. She chews on the money like it has no value and listens to the timer with mild disinterest. Then she’s done, and it’s back to yawning and whining. Dogs do this. Just like kids. They yawn and whine when they don’t love the game but then they just want to chew on dice. And it occurs to me that the dog just isn’t into strategizing.

Or so I thought.

I decide the dog and I need a walk. Car (cleaned weeks ago of the vomit) is the first fun zone we find. There’s plenty of kisses from the back seat before she settles to eating anything left on the floor back there. She quickly recognizes that no one is dreaded “dog car monitor” (akin to the dreaded “hall monitor” of our elementary school days … oh wait! I was one of them. Forgive me?) and that her driver (me) may indeed have eyes behind her head but they can’t see through the seats. So she’s cool to drool. 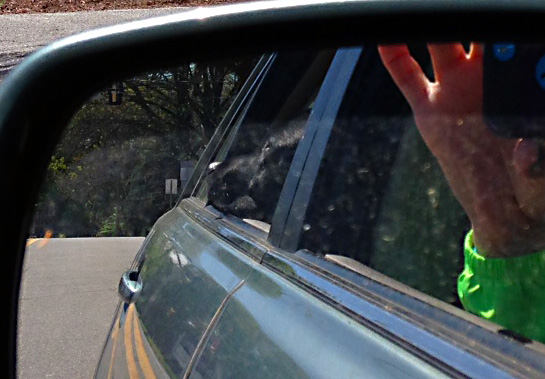 << I pause here to recognize that I have fully entered the conversational land known only to pet owners and parents. I am now talking the language of those who converse in poop and wind-flapping dog ears. >>

We hit the park. And park.

We begin to walk.

This translates to: I walk. She sniffs. She stops suddenly while I am still in a forward motion. I lurch backwards. I wait. I sniff the air, too, and try to appreciate the ways of a slower evening while contemplating the aroma of mulch vs poop and how to decipher the difference at this time of year.

Then I walk. She sniffs. She stops … This is just the first lap, folks. She’s not in working / service dog mode so I allow her the quick stops and she allows me the immediate, unintentional tug on her halter as I brace myself against whiplash. Whatever she is smelling – I don’t want to know about. But it better be amazing with a cap/bold A. Walk on.

And then I see it.

It’s almost dusk, and no one is around. The parking lot is empty. The sign doesn’t actually list “No dogs allowed” in its rules; just something about “for tennis players only”. But, I don’t know what that means, this “tennis” thing. So we enter. I latch the door. We unleash.

She runs wildly in all four; no, twenty-four; no, a gazillion directions. She hits full speed. She stops short. She spins 229º and goes at it again. She hits the net. She actually bounces off. My lifespan knocks off a few months and hers gains a few. She spins out at 147º and – holy cow/dog! – runs straight into the chain link fence thing (a design recently submitted to the Border Crossing Artistic Committee). It turns out that she is made of rubber. Several fewer months for me. Plus 10 for her.

She is a dog on speed. She’s into new math and watching my lifespan decrease in increments and excrements. She is one happy psychotic dog.

She avails herself of a water break and then we leash up. We walk, sniff, lurch another loop. But she spots the high-fenced, running field thing with its white painted lines and the net to race around (or into). I check again.

No cars in the lot.

We re-enter. I unleash her and …

I drop my glasses.

And the well-trained service puppy picks them up.

And decides that this is THE WORLD’S BEST. STICK. EVER. She can tell just by my reaction. My sudden need to get my glasses back from her must mean that we are about to play something better than any board game with chewable pieces. This is better than any book because she can hear me laughing-screaming-crying-peeing as she races around joyously participating in Drop It! (No), Give! (No), and Leave It!! (No). No. No. No.

She has me playing TAG-I’M-IT! (And for the record, there was an ear touch that she outright ignored. Cheater.) and CATCH ME IF YOU CAN (I clearly couldn’t). Oh amazing dog day! She is gloriously giddy.

She mocks me. She tosses the glasses up and catches them. She sprints and stops and spins and drops and pushes thoses glasses (glass side down, of course) along the rough pavement before she carefully picks them up again just to show me that she hasn’t forgotten them and isn’t about to step on them. Apparently, I am supposed to praise her for that.

As it turns out, I have been a perfect role model for her in these games of CHASE ME, I’VE GOT THE STICK when I’VE had the stick. It turns out that she was a good study because it’s clear that she has mastered those rules and now has run away with the fun.

She is actually strategizing at her game.

Damn dog. This thought is followed by increasingly clearer visions of a nice clerk showing me expensive frames and the expensiver << new word >> lenses that are now clouding that vision. DamndamndamndamnDAMN.

And then, out of nowhere, there’s a worldwide monetary alert that, for once, has nothing directly to do with American politics. And I stop seeing the dollar signs of replacement glasses.

Suddenly, I can only see the $20K vermin-vomiting dog chowing down on the “glass” part of “glasses”. That’s when my parenting superpower returns in that my-child-is-running-into-a-parking-lot way… I am superfast. I am superhuman strong. I am superparent gentle. (Never scream at the child. You can teach a lesson in fear but never in anger.)

Game over, Superexpensive Superdog. I win. (As if it mattered to her who had the glasses in the end.)

This was a double tag wagging moment for us both. She is super happy and super exhausted – something every parent hopes to achieve by dusk; I am super happy and also super exhausted, the latter of which I had kind of hoped NOT to achieve because I still had a lot to do. But I had just saved her life without, I must point out, willfully killing her for costing me a minor fortune in eyeglass replacement.

The only other good news? She has already pooped. And the park – thank you, dear park – has doggy poop bags. I’ll save you the description. (There are limits. I know that now. Send me a direct message if you really want the details. No photos. She doesn’t do selfies; even a dog likes her privacy.)

So, this is how this story ends:

The dog falls asleep on the back seat on the way home. She’s lost interest in chewing on anything attached to the car. She has no energy for window snout.

Her owner (remember her?) had a good night out with her peeps at the film festival which her service dog will attend next year, fully trained.

I have been a successful parent on all fronts:

I spend the next day attended to by a nice clerk showing me those expensive frames and expensiver (presumably dog-proof, but I buy the extra warranty) lenses.

The better to see her with. 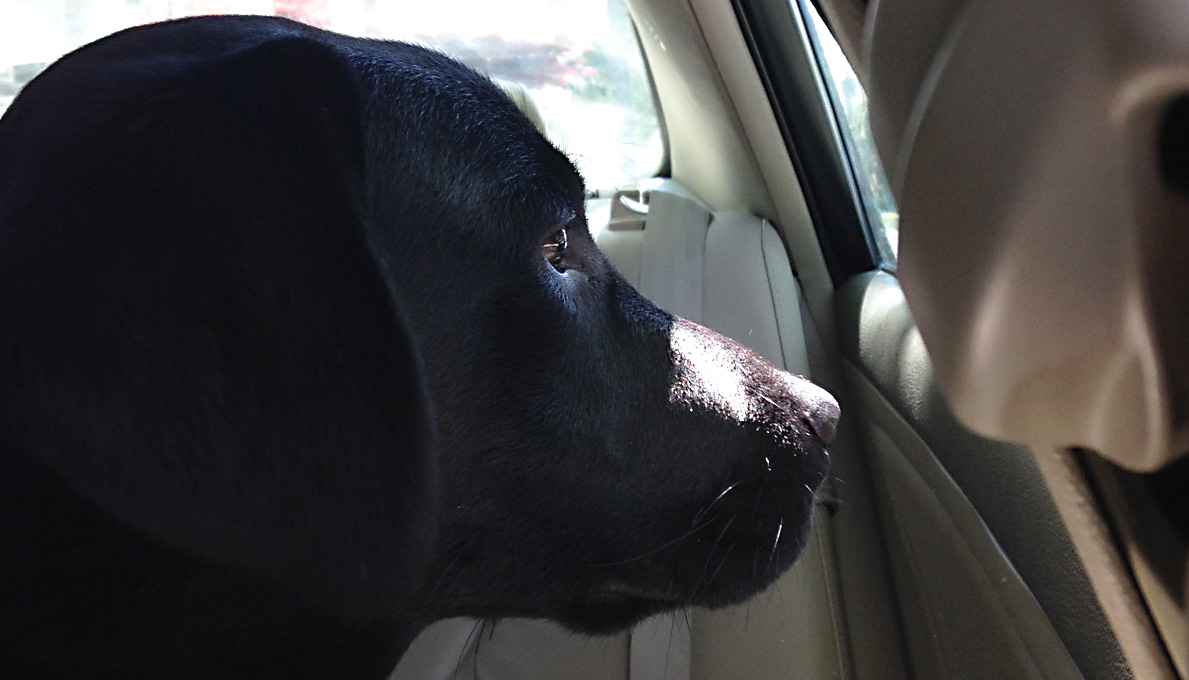