Being a Teen is an Age, Not a Diagnosis 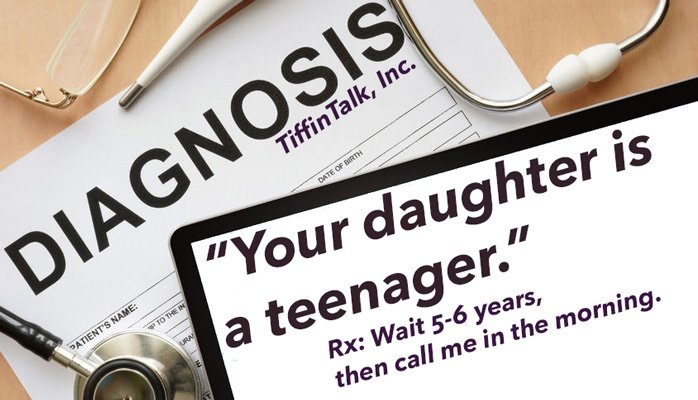 And when I’m not talking, I’m listening. (Which, by the way, is more important.)

And when I’m not talking and not listening, I’m watching. (Though I also watch while I talk and listen.)

I’m watching their favorite 'whatevers' change: their tastes, their habits, their clothing styles, their mannerisms, their tone of voice – all change, change, change. Subtle. Extreme. And in between. Until the new favorites change yet again.

Rarely is a change an overnight event. But often something new will just occur to me one morning as when my daughter proclaimed that she didn't eat cereal anymore and where have I been; and that’s when I wondered, huh, where have I been? Because I had noticed the 'no cereal thing' but I hadn’t registered it as an official ‘change’. No cereal after all these cereal years? Go figure. Any significant meaning here? Probably not. She was still eating a decent breakfast. But I'm watching nonetheless.

And that’s the simplest example.

Several years ago, I watched my oldest daughter, then a high school sophomore, become more and more exhausted. Her pediatrician announced the diagnosis: Teen.

As if “Teen” is a disease or condition and there is a treatment for it.

Teens are notoriously tired. Even this tired, her doctor said. And because depression causes fatigue, maybe my daughter was depressed. So my daughter tried three different antidepressants, one of which eventually seemed to help. Sort of. It you didn't count the fact that she was still exhausted and still taking 4 hour naps.

I just wasn’t buying it.

Except that I did. I tried to tell the doctor that it didn’t seem right but I was shut down by the "Teen" diagnosis again and again. Until I accepted it. Grudgingly.

This was the news headline: Mother Caves in to Pediatrician’s Diagnosis: “Teen”; Only Cure is for Them to Reach Age 20. Just Wait.

Fast forward several years. My younger daughter, now a high school teen herself, develops an odd cracking in her voice. When I polled the audience, half thought that, as a singer, her voice was changing. (Girls’ voices can crack and change just as boys do, by the way. Who knew?!) The other half said to see a specialist. My “mother antennae” were twitching. I opted for the specialist.

Here’s what happened in the quickest way that I can tell it: The specialist ordered – I kid you not – 2 pages of lab work. For a cracking voice! And half the audience said: “Medical robbery!”, while the other half advised me to just do one page or maybe less or none at all.

My own voices in my head begged me to continue to follow my antennae (and stop polling the audience because now I would have to defend what I was doing): Run it all. Don’t miss anything and hope that it’s nothing.

Except it wasn’t nothing. Everything we expected to be abnormal was fine. Everything that should have been fine wasn't. And it was a long list of 'not fine'. But the scariest was a very rare autoimmune disease caught, thankfully, at a very early stage by a thorough doctor because of a mother with twitching antennae who agreed to the 12 vials of blood.

Of course, my daughter’s life was then turned upside down for over a year with uncomfortable (mildly put) tests and numerous specialists until we could re-settle and resume life with a new normal and face a disease that may stay in remission or may become hugely life-changing or even life-threatening. No one knows what the rest of today will bring… much less, tomorrow. Right now, she’s in remission. So we keep going.

And then something else random happened. Midway through all this, my always wide-awake daughter #2 was becoming increasingly exhausted. All the time.

I know. Because I was watching.

Result: Narcolepsy. My talented younger daughter can hit REM in 60-90 seconds instead of 60-90 minutes. It’s actually tempting to be jealous of her.

So while my younger daughter now faces more changes and a newer norm, I am haunted ...

Switch back to my oldest daughter with that “Teen” diagnosis. Logic and family history now prevail and I find a doctor who will also run 2 single-spaced pages of lab work. Bingo! But different Bingo! Different autoimmune disease requiring different specialists and a different journey all her own.

And with this new information and the symptoms of her exhaustion which has never ever let up, she heads off to her sleep study. Finally.

It has take 3 years to discover that she was more than just a “Teen” back in high school.

Her “depression”? Likely related to lack of sleep and not the other way around. (Though by now, she may very well be depressed.)

Her frustrations and anger and harsh self judgement? Likely related – again – to lack of sleep and not any fundamental flaw in who she is.

In fact, there is nothing wrong with her even as something is very wrong with her. Having to drop her dreamed-of extra curricular activities in college was not a statement of her inability to keep commitments or an inability to socialize. She is tired and with reason. She is now learning to accept herself and work with who she is and learn more about what can be done. She isn't happy about it; but she is hugely relieved. And, yes, quite possibly depressed.

And like her younger sister, she is now learning her own new norm.

I’d like to tell you that I don’t look back. That I am a wise enough adult and smart enough mom to know that I did the best that I could in that time.

But I do look back, angry with myself and also sad.

My daughters are now learning to be their own health advocates. Part of that advocacy is to always bring someone with you to medical appointments to help you speak up for yourself, to help you find your voice (or to be your voice if you suddenly blank on every answer or go shy – because both things happen to us all). Part of that advocacy sometimes involves reminding a doctor or even a specialist that the eyes often know what lab results won’t yet show – because test results make recommendations for a majority and outliers do exist. Thus, labs can’t be the only story and they can't be the only source of information.

But even the best doctors can have their off-days, their misses, their realities.

This is what I have ultimately learned:

I talk with (not at) my teens.

I listen to my teens because that is even more important.

I watch my teens.

And this: I may not have a medical degree. But, I have a a doctorate in being a mother to my daughters.

And that damn well counts.

ENDNOTE: Just so you know as you watch your own teens, Narcolepsy is a rare condition to find in teens and is often undiagnosed until well into adulthood because, to be fair, that “Teen” diagnosis can be true if you have a stay-up-late kind of kid. But that’s why you are watching and fine-tuning your parenting radar – constantly. Even if you don’t know what the exact diagnosis might be, you know what it isn’t. The trick is, as I found out, standing up taller than the doctor who opts out of listening to you. Or find another doctor. And another. Listen to your child’s words and to their actions and to your own voices that are translating everything you see and hear. And when in doubt, opt for the tests – all of them.